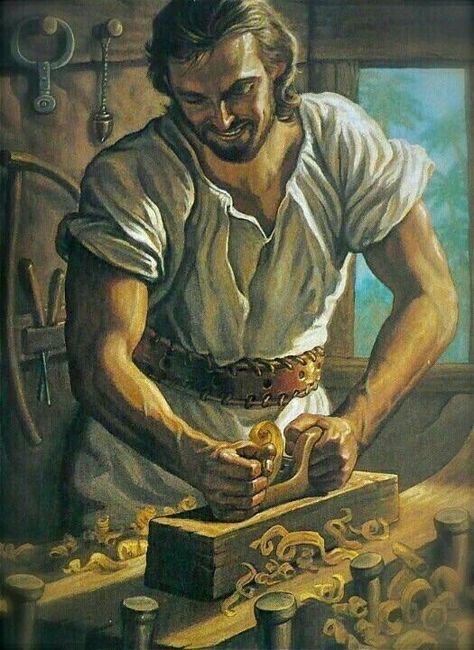 There are lots of images, caricatures and misnomers about who and what kind of person Jesus Christ was when he walked the earth 2000 years ago. Some imagine a fair-skinned, blue-eyed, flowing hair Jesus that looks like he would have fit in better at Woodstock in the 1970s than in first century Judea. Others imagine Jesus to have been just a soft-handed, “meek and mild” man who sat around saying wise and profound things. However, the Bible shows us that Jesus was not a namby-pamby adult male in need of a haircut and more sun.

Jesus was a man’s man. He had a beard (before it was cool). He had rough, calloused hands from years of woodworking. He may have even had a few remaining deep splinters from some of the thousands of pieces of wood he had shaped into something useful over the 25-ish years he probably spent working as a carpenter. He was muscular from lifting planks and logs. His arms strong and rippling from splitting, sawing and hammering. He knew all about the “speck in the eye” because of all the nights he went to sleep with flecks of sawdust he just couldn’t get out of his eyes.

Jesus knew how to make a “cord of whips” … and use it! He laughed in the face of danger, sleeping through tempests and standing tall in the face of crowds seething with rage and ready to stone him or cast him off cliffs. Jesus knew stuff. He knew about shepherding, farming, history, warfare, religion and winemaking. He could speak in public, lead and teach people, make a good joke, give a good jab, sing songs, cook for his friends, find his way around without a map, walk for miles a day, and sleep out in the open country.

Jesus was a man’s man. Tougher than nails, wiser than Solomon, always honest, and the embodiment of true masculinity. He was a M.A.N. – Masculine And Nice. He was considerate, compassionate, caring, emotive and passionate. He yelled, he laughed, he wept, he encouraged, he called out evil, he proclaimed what’s good.

Jesus cared deeply for women and showed them compassion and respect in spite of cultural norms. Jesus associated with the “deplorables” of society, caring more about people than what others thought of him. Jesus didn’t shy away from confrontation or conflict, but he used his words as his only weapon. Jesus valued children and rebuked those who didn’t. Jesus championed justice and spoke the truth, even when it wasn’t popular.

Jesus wasn’t just a man’s man. He’s THE man’s man. My aspiration in life is to emulate him as much as I can, and to encourage my sons, and every other man I know or don’t know, to do the same. Our world doesn’t need to be rid of masculinity, it needs more of it. Not the toxic, proud, womanizing, selfish, violent kind; but the kind that Jesus modeled. The kind that makes a man a M.A.N.